How can I draw a shape with higher entropy? I thought initiating a number of Brushes inside a confine in which the Brush turns towards the confine’s center when it reaches the border of the confine may produce some interesting results.

The Brushes are set as ‘Draw Along Brush when Collide’ just as in part 1 of this experiment. The two blue rectangles denote a Rectangular Confine.

Turn speed at boundary is set to 0.1.

The Brushes were well contained. It took about a minute or two for the Brushes to cover a significant portion of the rectangle. Still there are very conspicuous blank spaces. I noticed that the Brushes tend to move very slowly when they are clumped together. This makes the lines darker in areas where there is a clump. This also means that since the clumps are almost stationary, there will be some spots inside the rectangle that will not be reached in a reasonable amount of time.

Perhaps I can try making the radius of the Brushes smaller so that there will be more room for the clumps to move around.

‘Connect when collide’ mode of drawing.

Same with previous try, there is a disparity on darkness of the shape. I was happy to see the inconsistent edges form at the top and the bottom of the square.

Decreased turn speed when at boundary to 0.02.

With the turn speed set to a much lower amount, many of the Brushes escaped right after they were initiated. However their speed for a reason unknown to me decreases as they continue to collide and hit the boundary. By the second time they hit the boundary, they were trapped and produced the nice edges we see above.

It is also worth noting that the lines from the edges are directly towards the center. This is the result of changing the direction of the Brush towards the rectangle’s center when it is on its boundary. Perhaps in the future we can randomize this direction to be anywhere on the rectangle if I want to eliminate this pattern.

This one is a little difficult to tell the exact shape of the confine. If we gave it enough time, perhaps it would have come to be more defined, however the part where many of the Brush clusters were would be even darker. Perhaps too dark to see any kind of pattern.

Decreased radius to 10px. Draw along Brush, regardless of whether or not it is colliding with another Brush. Decreased line thickness to 5. 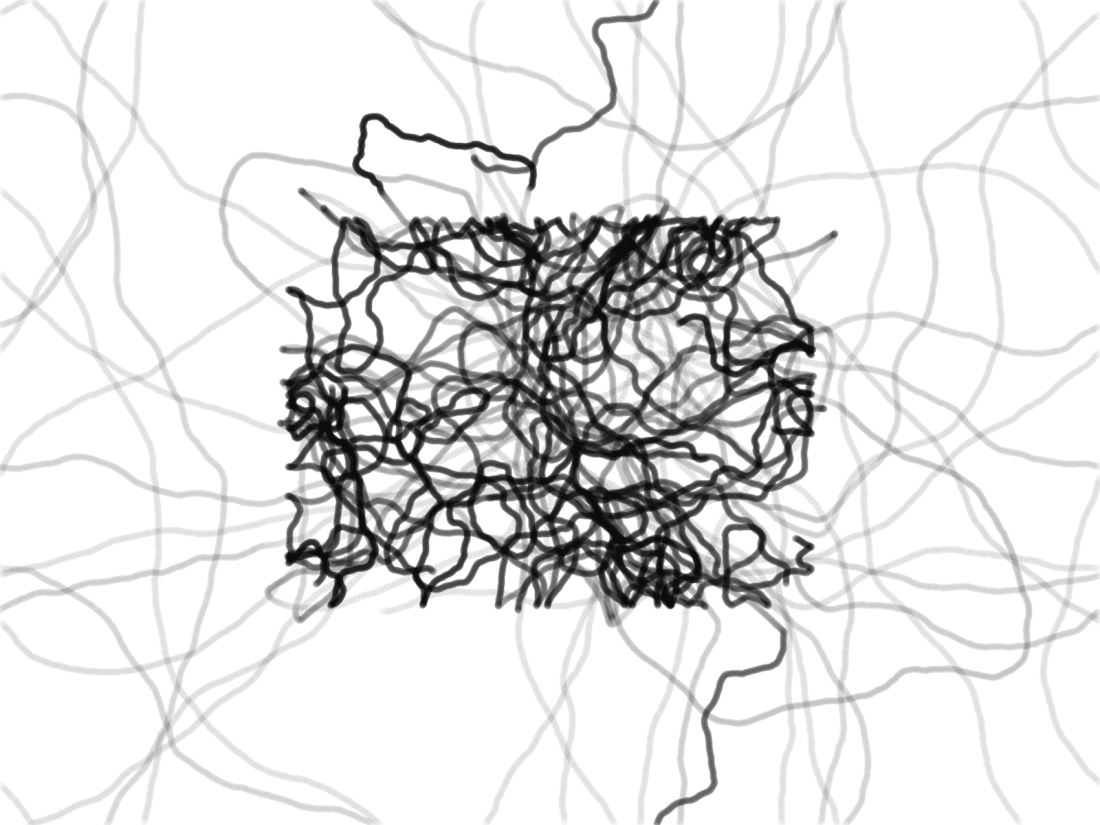 We can see the rectangular shape better than in previous try. It is still a mystery to me why the Brushes slow down after a while. The slow down in speed is causing the lines inside the rectangle to be more conspicuous than the rest.

We can clearly see the half-loops which open end points towards the center of the confine. The size of the loops are relatively uniform due to uniform turn speed and movement speed.

I increased the turn speed when at boundary and switched the draw mode to ‘Connect when Collide’. 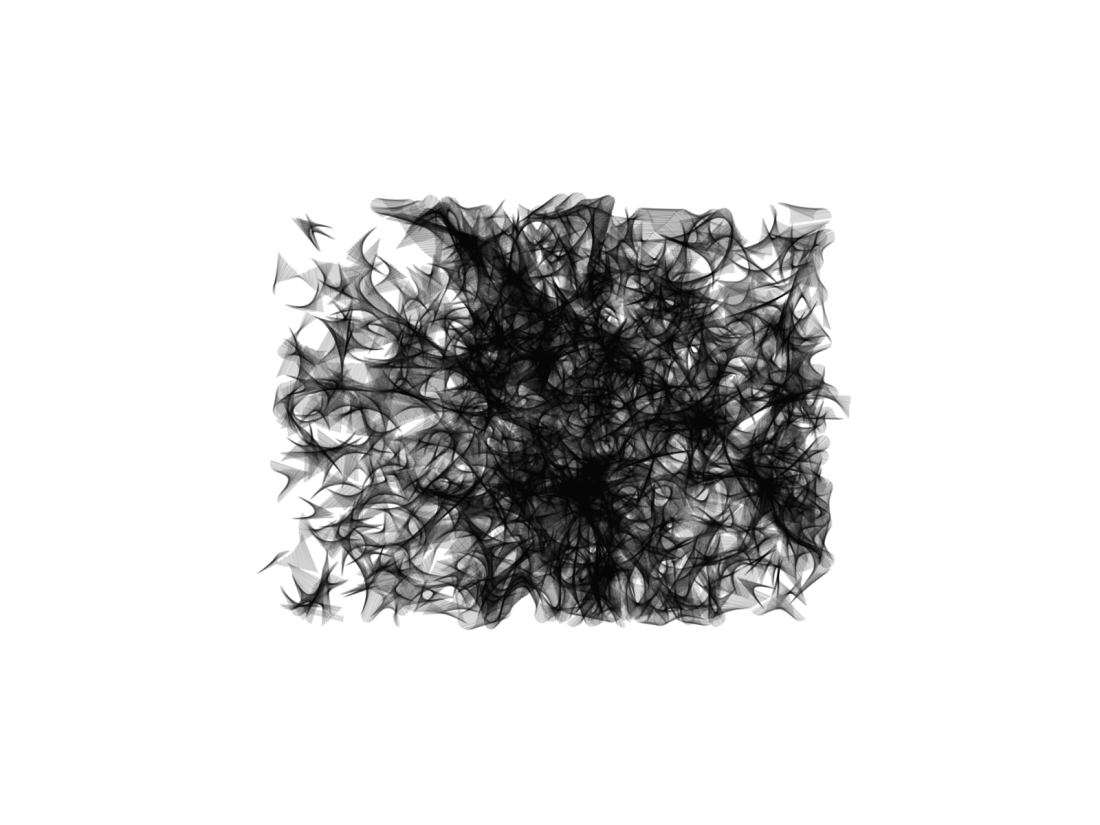 The pattern is nicely contained within the confine. There are nice variance inside and along the edges of the confine too.

In this try I initiated two RectConfines and initiated 15 Brushes in each.

I also realized that for the past many tries I had turned off the feature of the Brush that makes them congregate when they’re within a certain radius of each other. The reason why the overlap of the two rectangles are so bright is because the behavior in which a Brush is inside more than one confine is undefined.

Some ideas when colliding with both confine I can think of are change in color and change in mode.

I added back in the congregating behavior of the Brushes.

I think we’re starting to see the hint of a brushstroke. When the Brushes collide and form a congregate direction, the strokes form with darker and and thicker lines which are more distinguishable from the rest.

It seems like an interesting idea to deliberately initiate a cluster of Brush where we want the Brushstroke to start (perhaps according to an input image).

I think the turning to the center when at a confine’s edge has introduced an undesired degree of uniformity. We could randomize this per Brush, then we would risk breaking apart the brushstroke.